Self portraits were a big segue into professional photography for me. Working as a model, I began to tire of frequently needing to find reputable sources to update images in my model portfolio & began to take my own photos

Self portraits were a big segue into professional photography for me. Working as a model, I began to tire of frequently needing to find reputable sources to update images in my model portfolio & began to take my own photos. I learned a lot & am happy to say that I’ve gotten it down to a science now.

I believe that if you can take your own photo – a tedious & often rushed process – you can take anyone’s photo, and 10x better. Photographing someone other than yourself allows you the luxury of taking your time, constantly tweaking & revising your composition, reviewing your shots, etc.; something you can’t really do during self portraiture. A lot of times, however, it is the only option, as it was during my trip to Easter Island, which was a journey worthy of an entire blog in itself…but I will try to keep focus here.

My husband has his own set of extraordinary talents, but unfortunately for me, photography is NOT one of them. So, when we travel, our holiday photos are either in the hands of (mostly camera illiterate) strangers or, well, me.

The photo above is one of my favorite examples of self portraiture on the fly that happened to turn out exactly as I wanted it to, without the use of any studio lighting or assistance ! As we were traveling to & on the most isolated populated island in the world, I knew I had to travel light; no reflectors, tripods or additional baggage that would have slowed us down or been a hinderance to carry. For this shot, I balanced my camera between a pile of jagged rocks & ran back and forth between my spot – marked by a smaller rock I used for my focus point – and a spot close enough to my teetering camera for the remote to send a signal, every 10 shots. Did I mention there was a sleeping baby on my back ? Shhhh….

Cellphone photo of my madness, snapped by my husband

Many ended up crooked due to the camera falling a bit & there were a lot of awkward shots, since I was in constant movement trying to flare my skirt to give the illusion of wind – the waves below were dramatic due to the rocky coastline & I wanted to mirror that in my stance – but my efforts were not in vain & I ended up with one of my favorite shots, ever. 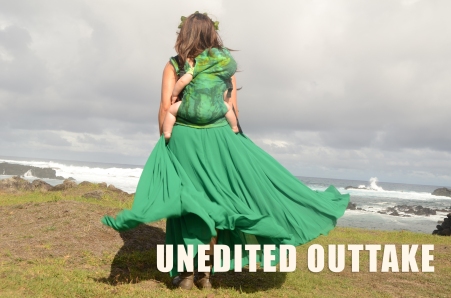 There are about 40 other photo outtakes from this shoot

I guess I just wanted to make a post to show that it doesn’t matter where you are or what gear you (don’t) have; never pass up an opportunity to execute your vision !